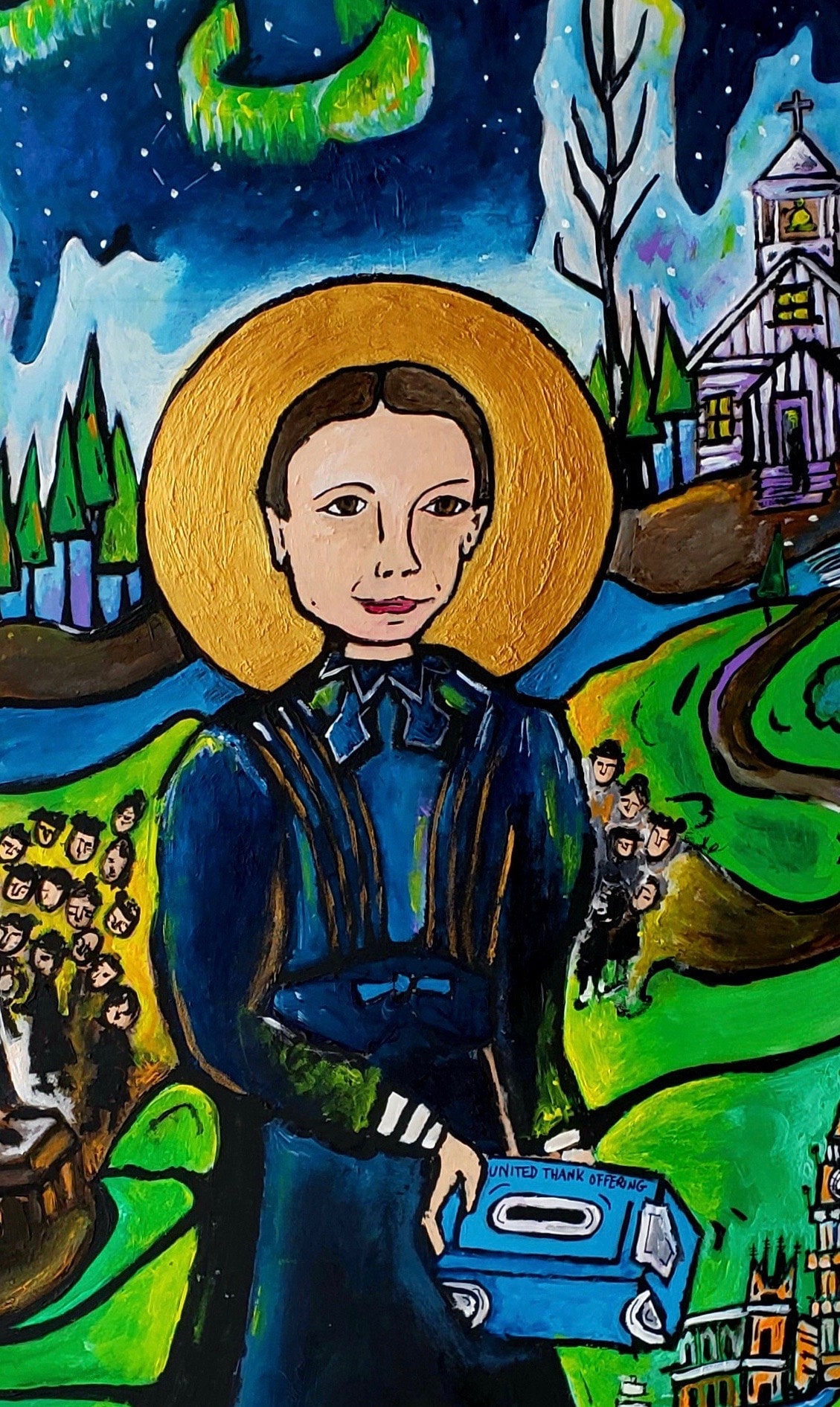 If you would have told me back in the year 2000 when I first started painting that I would still be painting two decades later, I would have been very surprised. I’m not always great at sticking with things.

Beyond that, I could not have foreseen that I would intentionally move away from Erie, PA, a place I have always loved living and away from lifelong friendships, to pursue life as an artist in an art community in Oil City.

I’ve never been great at taking risks, so itt helps to have a partner who is adventurous!

Furthermore, if you had told me that one of the main subjects I would paint for the past decade would be religious figures, particularly Catholic saints (I can almost feel my Northern Irish, Presbyterian grandfather giving me the side eye), many very obscure and all very heroic and interesting, I wouldn’t have known what to say about that either.

I’ve never been great at being religious.

I don’t really consider myself to be religious, per se. I am definitely spiritual, and definitely a seeker, but a person who paints religious people and saints? What? That wouldn’t have seemed quite like me to myself twenty years ago or even ten. Or now!

Fast forward to now, though– I have had the opportunity to fill three entire calendars– thirty-six paintings– of religious people– mostly, I’m proud to say, women– who have done such extraordinary things. I have painted dozens of paintings of joyful, dancing monks, who are also all religious in some way. They are all simple people who did something special.

These projects have led, one to another, in the most unexpected and magical ways. And, though I don’t feel particularly religious, I love these commissions so much because every time I paint someone like Dorothy Day or Etty Hillisum or Clare of Assisi or most recently Julia Chester Emery, I get the pleasure of learning the story of yet another seemingly ordinary person who was by no means ordinary.

I grew up loving superheroes. My two favorites were Wonder Woman and Bat Girl. They lived these rather quiet and unassuming lives as their alter egos. In “real life,” Diana Prince was always a civil servant or a government worker and Barbara Gordon was a public librarian. I guess what that always meant to me was that Super Heroes were just quiet, everyday people waiting for the right (or wrong?) thing to happen and then the glasses came off, the hair went up and it was all Invisible Airplanes, Magic Truth Telling Lassos, and Turbo-Boosted, Tricked out Motorcycles!

OK, so it may not be quite all that dramatic of a change, and there may not be telephone booths or caves/underground lairs involved, but the feeling behind all these people, saint or superhero, is the same:

A person is passionate about a cause and fights for it in a way that changes things. In a way that makes an impact. In a way that others around them find to be extraordinary, even if they don’t feel that way about themselves.

This brings me to my most recent icon commission: Julia Chester Emery.

When Heather from the Episcopal Church’s United Thank Offering contacted me about painting Julia, she told me googling JCE (as she is affectionately referred to) probably wouldn’t get me anywhere because she was such a private person. I mean, she was also a bit pre-Internet, as she was born in 1852 and died in 1922, so it’s not like I could check out her Instagram page.

“Julia Chester Emery was National Secretary of the Women’s Auxiliary, now called the Episcopal Church Women, from 1876 until 1916. She was a modest and self-effacing Victorian lady who was so careful to stay out of the limelight that it is difficult today to piece together all the things she did to advance the missionary efforts of the church and to enable women’s ministries. She led in the effort to get canonical status for deaconesses. She invented and brought into being the United Thank Offering. She was the indefatigable “Miss Julia” to a whole generation of missionaries, both men and women. Her entire life was focused on devotion to this one cause: the spread of Christ’s kingdom among all people.” - www.unitedthankoffering.com/history

Obviously, Julia Chester Emery really was a superhero– like Diana Prince, she was a civil servant; and like Wonder Woman, she was a woman who fought for Justice and Equality and who traveled the world (she probably would have loved to do so on an Invisible Plane) with a singular mission to inspire people to give to others because they are grateful for what they have themselves. Like Barbara Gordon, she was an educator who helped people, specifically women, overcome barriers to access; and like Bat Girl, she was a fearless explorer dedicated to a cause.

She was, in short, a seemingly ordinary person who was by no means ordinary. And she has inspired and will inspire generations and those to come.

I am honored each time I’m asked to paint something for someone, because honestly it’s the whole reason behind painting anything for another person, be it saints or a favorite pet, or a special place or a gift for a friend of one of their favorite things: people want to have something painted because it inspires them in some way or they want to give a gift of inspiration.

There is pretty much nothing more special in the world to me than being asked to create my vision of something that someone else finds inspirational.

And, so I want to take this opportunity to thank the United Thank Offering, especially Heather, for asking me to create the first ever icon of Julia Chester Emery, who was both ordinary and extraordinary.

It was such a pleasure getting to know her.